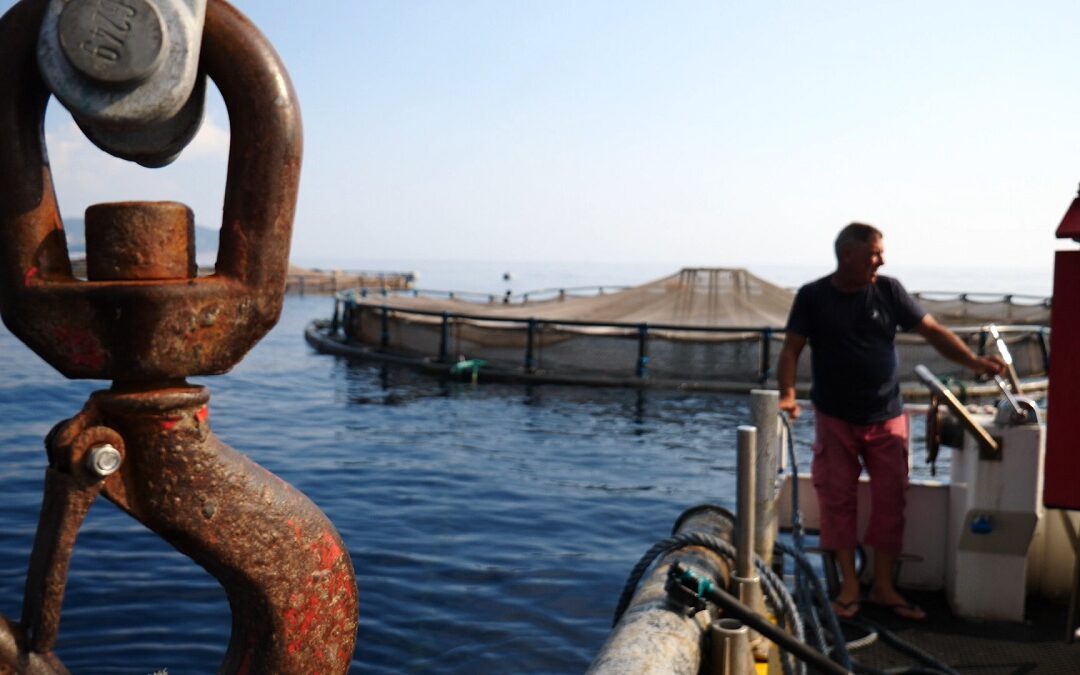 The environmental impact of fish farming in the Mediterranean Sea

The cages float on the surface of the sea. They can be seen clearly from the shore: 27 circles 20-30 metres in diameter, each hiding underwater nets that contain hundreds of thousands of fish. Some are sea bass, others are sea bream.

This is Mytikas, a small village overlooking a gulf in the Inner Ionian Sea in western Greece. The landscape and the sea make this place a paradise on Earth for some. The waters are crystal clear and have villages with salt-encrusted walls and rocky mountains as a backdrop.

The beauty makes it easy to understand why the expanding presence of fish farms has been generating friction, as has happened around salmon farms in Scotland. These are places that rely on tourism and traditional fishing activities.

Bass and bream are mostly farmed in the Mediterranean in Greece, Spain and Italy. Greece is by far the largest European producer, reaching 120,500 tonnes and €506 million euros in 2019.

Production in Mediterranean countries has been expanding since the early 2000s, supported by European Union (EU) and national funds, especially the European Maritime and Fisheries Fund. But, as in Scotland, environmental issues have multiplied along with the farms.

Almost 20 per cent of bass and bream production in Greece is in the Aetolia-Acarnania region and the nearby Echinad Islands, on the Ionian sea.

Satellite images of the region show farms a few metres from the coast, often in coves, or short distance from villages. Proximity is one of the reasons for the conflicts with local communities.

“The first fish farms were built in the 1980s in closed bays, near the cities, and still remain there today,” said Angelina Metaxatos, a biologist and former official in the fisheries directorate of the Greek Ministry of Agriculture.

According to a 2011 study carried out at bass and bream farms in Greece, a farm producing 100 tonnes of fish discharged nine tonnes of nitrates into the sea. The waste ends up on the seabed or dissolved in the water, along with other wastes such as phosphorus.

Another scientific study published in 2015 concluded that “the release of aquaculture waste into water is becoming a problem due to the load of organic and inorganic nutrients that leads to the deterioration of the environment.”

According to Metaxatos: “Expensive offshore cages should be used to reduce the impact of farms, anchored at great depths over 40 meters, in the open sea, out of bays and away from shore or settlements.”

Instead of encouraging relocation, however, the Greek government has included the Aetolia-Acarnania region in a strategic plan for the development of aquaculture since 2011. Ten of Greece’s designated 25 fish farming expansion areas are located in the region covering ​​16.7 hectares.

“An obsolete fish farming model is applied on the west coast of Aetolia-Acarnania, where the structures are located near the banks, in areas with low water circulation, to allow low investment and maintenance costs,” said Anastasia Milou, researcher of the Institute of Marine Conservation Archipelagos. He studied the environmental impact of the project as a scientific consultant for the Aetolian municipality of Xiromero.

The creation of allocated zones for aquaculture in Europe is supported by the United Nations Food and Agriculture Organisation (FAO), but under specific conditions. “There is a lot of investment there. You cannot take a piece of paper and say, OK this polygon is for aquaculture”, said FAO aquaculture official, Alessandro Lovatelli.

“If we have cages, we need to have a certain depth, we need to have certain currents, so there is a lot of work that has to be done to allocate these zones for aquaculture development. And  who has done this so far? You know, not many.”

The area designated for the expansion of the farms in Aetolia includes three Natura 2000 sites. These are marine areas protected by the EU for their rich wildlife and their valuable Mediterranean underwater meadows, known as Posidonia seabeds.

“Ironically, the area contains very little of the marine megafauna that should be the main reason for the creation of the marine protected area in the first place,” said biologist and environmentalist, Theodore Karafkis, in a dossier published in 2018 in the journal Biodiversity.

“The populations of this megafauna, particularly when accounting for dolphins as the prime indicators, have suffered and in fact have collapsed over the last 20 years.”

Karafkis argued that the changes could be partially or entirely attributed to human pollution, which has increased since the 1980s. “It is important to note that it was during the same time period that aquaculture farms were rapidly and increasingly installed in the area,” he said.

Another reason for fish farming being criticised in Greece is the use of the toxic chemical, formaldehyde. It is poured into the cages to try and control the parasites that proliferate due to the high densities in which the fish live.

A bass and bream farm at Poros Island in the Saronic Gulf was fined in 2012 by the Greek environmental inspectorate for allowing its use of formaldehyde to get “out of control”.

Despite the infringement, in 2014 the farm obtained a new license for another 10 years. In 2015 it was bought by Selonda, belonging to Andromeda Group, the main fish producer in Greece. At Poros Island the Greek government has established another zone for the expansion of aquaculture that will occupy ​​2,400 hectares on land and 1,090 hectares at sea.

Asked about the regular use of formaldehyde in sea farms, Fotini Arabatzis, deputy minister at the Greek Ministry of Rural Development and Food in 2020 said to the National Parliament: “The use of formaldehyde as a veterinary medicine is allowed for animal species, it is safe and leaves no residues in the tissues because it is a highly volatile substance.”

Similar environmental problems have also emerged in Italy in regions where bream and bass productions are concentrated.

Italy produces around 13,000 tonnes of farmed fish a year and it is backing the expansion of the industry. Most farms are based further from the coast than in Greece, but they are almost always located within gulfs or sheltered sea areas, where management costs are lower.

“Those who want to build an aquaculture plant choose areas less exposed to storms, because otherwise they would suffer direct damage from the sea,” said biologist Giuseppe Nascetti from Tuscia University. “But the currents there are not strong enough to allow a change of water to take away the pollutants.”

Until a few years ago the ​​greatest concentration of bass and bream production in Italy was in the attractive tourist area of the Gulf of Gaeta in Lazio. Some 50 fish cages still operate in the gulf, despite local authorities ordering farms to be relocated since 2009 because of the pollution they cause.

“The environmental conditions of the coastal marine waters of the Gulf of Gaeta are to be considered critical,” stated a study carried out by the Lazio Environmental Protection Agency and Sapienza University between 2012 and 2015.

The study blamed “strong urbanisation, the tourist expansion, in association with agricultural, livestock and aquaculture” for “the deterioration of the environmental quality of the coastal strip of the gulf”.

“The study reports alarming data and highlights the complete impoverishment of the Posidonia seabed in the gulf,” said Paola Villa, former mayor of the local municipality of Formia.

In recent years sea farms in Italy have expanded in the Gulf of Follonica in Tuscany. There, local authorities allocated 17 million square metres of sea for sea bass and sea bream farming.

This story iwas pubblished with the support by journalismfund.eu, an independent, non-profit organisation in Brussels that supports cross-border investigative journalism.

Read the original story on: