Eating deforestation, European and Italian imports behind the fires in the Amazon 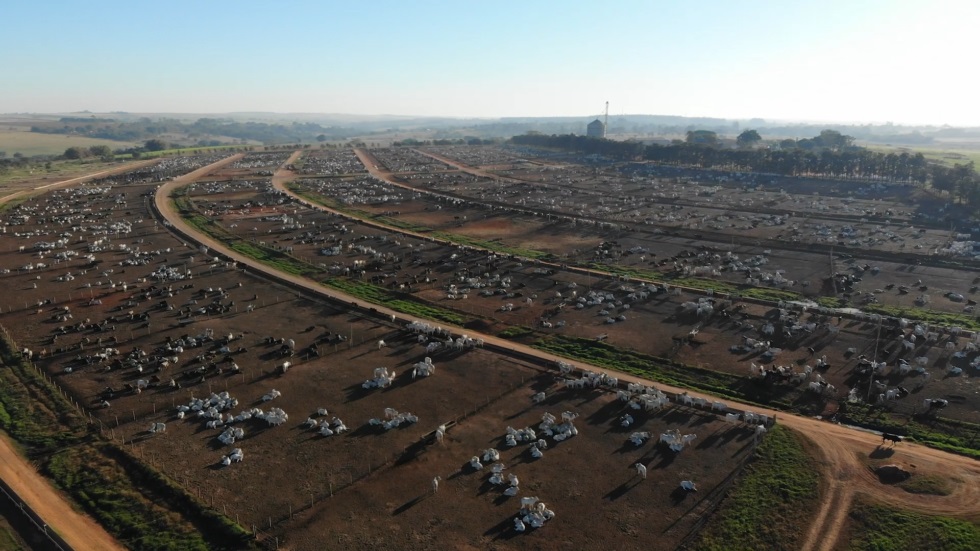 The main beef producer in Brazil is directly involved in supplying cattle from areas of the Amazon that have been illegally deforested. This meat continues to arrive in large amounts in Italy, where it is used for the production of Bresaola della Valtellina and canned meat

The main beef producer in Brazil, the company JBS, is directly involved in the supply of cattle from areas of the Amazon that have been illegally deforested, according to a new international journalistic investigation. This meat, despite the global outcry for the fires that devastated the Amazon just a year ago, continues to arrive in large quantities in Italy, the first European importer, where it is mainly used for the production of Bresaola della Valtellina and canned meat.

In recent days attention is returning to the Amazon, where a new fire season is starting, threatening to be even worse than the dramatic one of 2019. In June 2020, the satellites of the Brazilian National Space Research Institute (INPE) detected in the Brazilian Amazon 2,248 new fires, with a sharp increase compared to the 1,880 fires recorded in June 2019. In the first three weeks of July, the satellites identified another 2,487 new fires.

Pastures and monocultures are the main drivers of deforestation, that is leading to the ruin the largest “green lung” on the planet, making Brazil one of the main culprits of climate change. According to FAO, the creation of new pastures is responsible for around 80 percent of all deforestation produced every year in Brazil.

The Brazilian beef in Italy

Despite the fire crisis in the Amazon, in 2019 Europe imported 65,000 tons of beef from Brazil, with a sharp increase compared to the 43,000 tons imported in 2017 (Eurostat data). Italy is the main Brazilian beef importer in Europe, with 27 thousand tons in 2019, for a value of 137 million euros.

Most of this meat is used in Italy to produce Bresaola della Valtellina (about 13 thousand tons, according to the producers), Simmenthal canned meat (at least 1.7 thousand tons in the last year) and other industrial or catering products.

According to a trade database, in the last 12 months (between May 2019 and April 2020) Italian companies have imported 11.5 thousand tons of beef from JBS. The main importers are Primo Bervini (3.8 thousand tons), Silca (2 thousand tons) and Bolton Food (1.9 thousand tons, in this case often identified as “Simmenthal”).

The three companies refused to respond to our request for comment, in which we asked if they are aware of the link between deforestation and the Brazilian beef that they continue to import. A year ago Primo Bervini, president of the Bervini company, told us that “for information received” he assesses JBS “in line with the commitments to avoid deforestation in the Amazon”.

“The North of Brazil, not being able to export to the European Community, leads us to think that even from those areas there are no contacts concerning our work,” said Bervini. In realty, according to the official list of farms authorized for export to Europe, most of these pastures are based in Northern Brazil, especially in Mato Grosso and Pará.

Overall, Silca Spa is the company that imported the largest quantities of beef from Brazil into Italy (9.3 thousand tons between May and April), despite the fires even increasing by 30 percent compared to the previous 12 months. The company did not respond to our request for reply.

Pastures in the Amazon

The main Brazilian beef producer, which is also the world’s leading meat producer, is the corporation JBS, a giant with a turnover of $ 46 billion a year. In the past, JBS has been repeatedly challenged for its role in deforestation in the Amazon: according to data from the Brazilian research institute Imazon, approximately 75 percent of all pastures in the Amazon belong to or provide this company.

The company has always declared itself extraneous to the problems of deforestation: “Livestock supply operations and the entire supplier monitoring system are controlled annually and independently”. JBS refers to independent audits that it commissioned: “The results of the audits conducted over the past six years show that over 99.9 percent of JBS’s livestock purchases were in line with the company’s social and environmental criteria. The 2019 audit showed that 100 percent of JBS’s 2019 purchases were not in line with the company’s policies. “

Reading the report of the audit, carried out between April and June 2019, we found out that “no evidence was found of purchases from farms placed under embargo by Ibama (the Brazilian environment agency)”. The same document, however, also specifies that “JBS has failed to create a traceability process capable of monitoring indirect suppliers“.

“Indirect suppliers” means all the farms where the cattle were born and bred before reaching the last farm, where the calves are fattened and prepared for the slaughterhouses. According to the “independent” audit commissioned by the JBS itself, the company is only able to monitor the fattening farms, but does not know which farms the animals come from in the previous steps.

“As justification,” reads the audit again, “the company states that the traceability of animals from birth to slaughterhouse would only be possible through total access to data on animal transport” which are available only to the Brazilia Ministry of Agriculture. With this statement, the company steps aside, essentially declaring that it “cannot know” where the cattle come from before reaching its direct suppliers in Brazil.

One selfie too many

An international investigation produced by The Bureau of Investigative Journalism (TBIJ) and Repórter Brasil adds a new element to this picture, proving the direct involvement of JBS in transferring livestock from an embargoed company to another “clean” one, from which the meat multinational then purchased thousands of animals destined for two of its slaughterhouses in the Amazon.

The farm under embargo is called Estrela do Aripuanã, is located in Mato Grosso, in the Brazilian Amazon, and belongs to the entrepreneur Ronaldo Venceslau Rodrigues da Cunha. The farm was fined in 2012 of 2.2 million reais (about 360 thousand euros) due to the illegald deforestation of an area of ​​approximately 1,400 hectares. Still in 2018 and 2019, NASA satellites (VIIRS) show several fires lit along the edges of this fazenda, apparently lit to extend its surface.

The same entrepreneur also owns another farm, Estrela do Sangue, always located in Mato Grosso but outside the area under embargo. Between June 2018 and August 2019, a livestock handling log, obtained by the authors of the investigation, lists the journey of 158 trucks with a load between 45 and 50 heads each, for a total load exceeding 7,500 heads, moved from breeding under embargo (Estrela do Aripuanã) to the “clean” one (Estrela do Sangue).

According to the same records, the latter farm, between November 2018 and November 2019, delivered 7 thousand heads to two of the JBS slaughterhouses in Mato Grosso.

A surprising element of the investigation by TBIJ and Repórter Brasil is that JBS itself would have played a role in the movement of livestock from farms under embargo to “clean” ones. The evidence is a series of photographs, published in June and July 2019 on Facebook by some drivers of the trucks loaded with cattle, showing a long line of trucks with the JBS brand starting from the Estrela do Aripuanã farm and reaching the Estrela do Sangue farm. A transfer of hundreds of animals, that in traced also in the register of livestock movements.

“Here we are again with lean cattle,” writes the driver in the post, later removed from Facebook. “Aripuana x Juina (both locations in Brazil, ed.), Estrela aripuana, estrela do blood direction, working together with beautiful people has become a trip”. 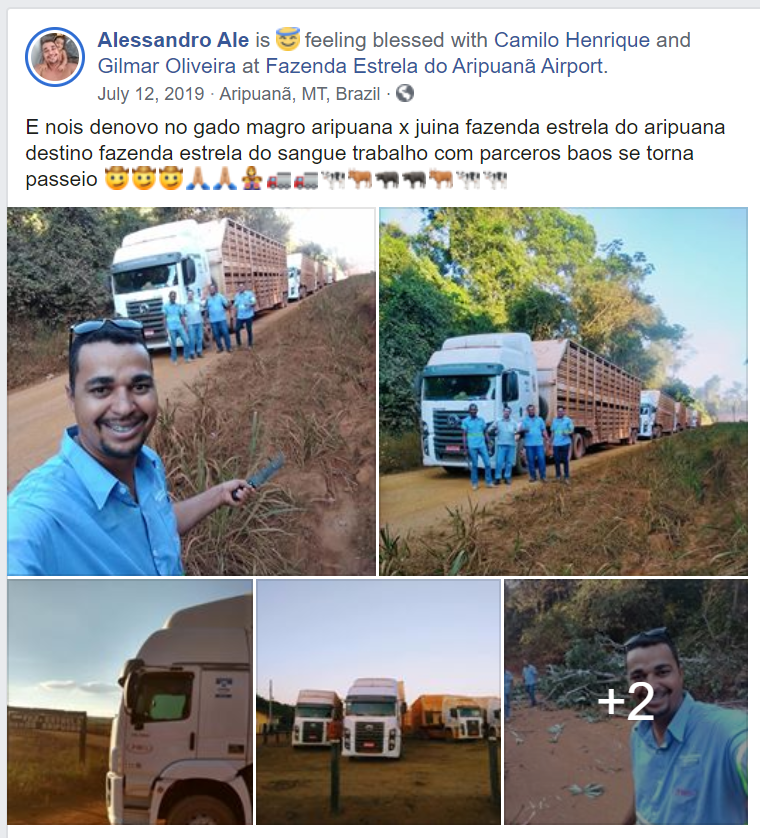 JBS, in a reply to the investigation, claims to have “opened an investigation” regarding the series of photographs contained in the post, and that “the transportation of livestock between farms/clients using its transport service does not reflect its operating standards”.

The company, however, is denied by an interview to Leonardo Vieira, coordinator of the logistics of Friboi (a brand controlled by JBS): speaking to an audience of farmers, Vieira promotes a “three-pass transport” system, where trucks are used to transport livestock from one grazing herd (first pass) to another where fattening is carried out (second pass). Here, to reduce costs, the same trucks unload the cattle and load others already fattened, “ready” for the slaughterhouse (third step). 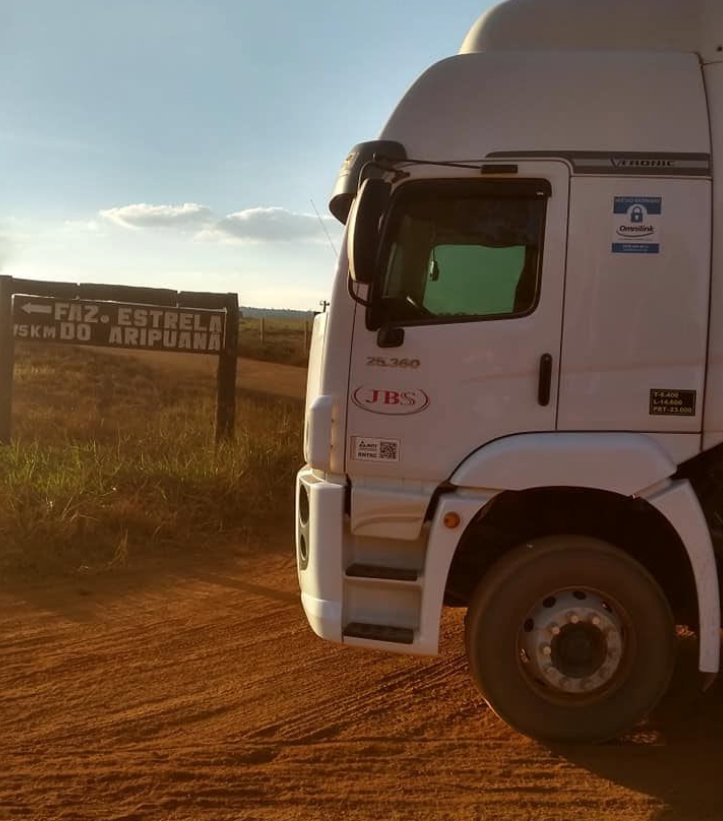 One of the photos published on Facebook shows a JBS truck in the area of ​​the farm under embargo.

In July 2020, an Amnesty International report documented a similar case also concerning JBS, allegedly responsible for purchasing cattle from farms located in deforested areas of the Amazon, making it pass (in one case for a few minutes) through other “clean” and certified farms.

In the Amazon the connection between fires, deforestation and pastures does not however concern JBS alone. A recent study by the Chain Reaction Research overlaps the areas affected by the fires in 2019 with the supply maps of different meat and soy companies.

The research is based on data from the NASA VIIRS satellite system, which recorded 981,282 fires from July to October 2019. According to the researchers, as regards to the meat companies, the most involved were JBS, with 317,096 fires in the supply areas, Minerva, with 105,091 fires, and Marfrig Global Foods, with 100,341 fires.

Read the article (in Italian) on: